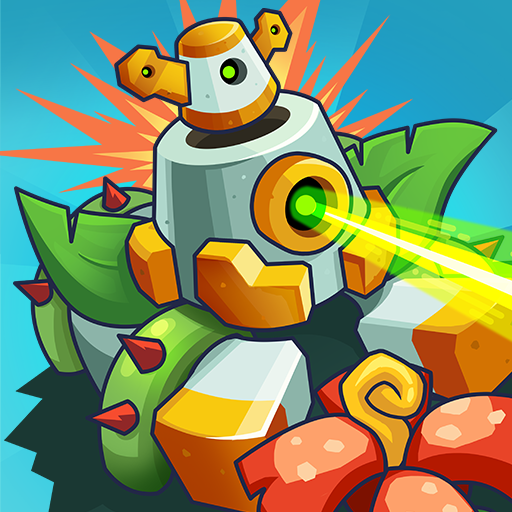 Battle mighty enemies and guard the castle in this epic strategy tower defense!

Defenders! Will you heed the call to defend the kingdom? Are you ready to take on the most epic tower defense game and become the king of heroes that the realm needs? A myriad of heroes and towers await your strategic and tactical prowess to crush the forces of evil!

Start playing Realm Defense now and take command of a diverse cast of heroes like Smoulder the mighty dragon, Bolton the Wizard, Helios the Phoenix, a mysterious sorceress, and many more beyond your wildest imagination!
Use archers, barracks, magic towers, and cannons to defend the kingdom from the rush of slimes and rattling skeletons. Explore vibrant worlds of frozen tundra, scorching desert sands, a magical society in the skies, into dark underground tunnels and a land of cherry blossoms. All with unique factions of enemies to conquer, and more to come!

Do you have the tactics and strategies to retake the kingdoms that have been overrun with the hordes of enemies? Prove yourself to be the ultimate commander!
The forces of evil are relentless, craft the perfect defense and turn back the invasion of the Dark Knight’s forces!

Want to prove that your tower defense skills are the best in the world? Then join the weekly Tournament and compete globally, climb the ladder through the season, and claim the title of Grand Master to show the world your mastery!

Collect a vast arsenal of spells and power items to assist in breaking through the enemies’ assaults! Empower your heroes by taking on daily challenges to collect the power to awaken the strength within your heroes.

Customize your heroes by collecting skins! Claim skins from seasonal events or by competing in the tournament to earn skins that mark you as a champion! And, show them off in the Tournaments!

• 300+ levels with various game play modes
• Multiple worlds and realms to play with – Each having four different towers
• Compete in tournaments to display your tower defense skills and win big prizes
• Powerful heroes with unique abilities to aid you: Fee the Archer launches a deadly Kill Shot, Lancelot the Knight unleashes the Fist of Justice, Smoulder the Dragon rains down Heat Seeker fireballs and many more
• Face off against epic bosses including a Skeleton Mage that rides a giant slime and zaps your heroes and a bomb tossing, mammoth riding Goblin King, and smolder your enemies to victory
• Huge variety of enemies offer multiple challenges: Burn your enemy, freeze them, and more with 4 spells to cast in battle
• Beautiful landscapes and character animations
• One of the best tower defense games free on the android market
• Fun strategy games and royal challenges

PLEASE NOTE! This online TD game is free to play and made by people who love tower defense games. We sincerely hope you enjoy our work!