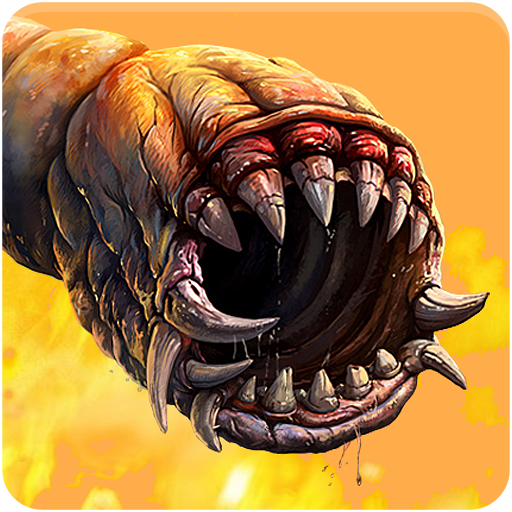 Control the mind-boggling underground alien monster with your finger!

"A-a-a-a-ah! He-e-elp! That huge terrible worm just swallowed Grandma! A-a-a-a-ah! Now it's right behind me! Noooo!…" CRACK!
…
"I rode my bike along West twenty-seventh street and then it jumped out right from the ground! Dunno what it is but it's BIG! I hardly could hide myself behind a recycle bin, but it smashed my bike!"
…
"Operator, unusual activity reported ten miles east from the town by route twenty. Witnesses say they saw something like a big black snake that appeared from the ground and attacked a tiger… what? No, I have no idea what the tiger was

doing in Buffalo."
…
"Oh my Gosh… Look there! It's a flying saucer! And it's going to land here!… Oh look!! That big thing just jumped into the sky and bit off half the saucer! Have you seen that?! Looks like a big caterpillar but has no legs!"
…
"Yes, mister, I heard of it. My grandfather told me about those giant worms when I was a kid. He told there were many of them before and they stole cows right from the pasture another day. But I never saw one myself."
…
"Yes sir, giant monsters inhabit this valley. Be careful!"

It's time to take the mind-boggling underground Monster under your control!

What is he? An alien? An awakened prehistoric predator? Genetic monster? It is really not important for those unfortunate who have sunk into oblivion in his giant poisonous throat. Nothing personal – it's just the predator's lunch time.

Animals, birds, businessmen, punks, lizards, and even dangerous predators like tiger are now nothing more than snacks for your omnivorous monster worm!

Meet the highly anticipated Android version of the original Death Worm game – a Top-50 indie game of all times according to indiegames.com!

Play a Blitz game on the go to have a bite! Then get back and challenge yourself in another Survival game round trying to feed your hungry monster pet as long as you can! Unlock new locations and beat dozens of challenging levels in

Campaign Mode! And never get bored with the Mini Games!

Upgrade and level up your worm! Unlock other worm types that are even more powerful and exciting! Become stronger and get further with the new worm upgrades!

Blow up cars and tanks; bring down planes and helicopters and even the alien UFO’s! Fight and destroy enemies of over 40 types!

This is the game that perfectly suits if you need to quickly relieve stress or just have fun!

Optimized for smartphones and tablets!